Jon Fitch: I Have No Idea What's Expected Of Me To Get Title Shots

Share All sharing options for: Jon Fitch: I Have No Idea What's Expected Of Me To Get Title Shots 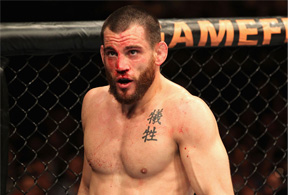 Jon Fitch has a near unparalleled 13-1-1 record inside the Octagon, is the universally ranked No. 2 welterweight in the world, and hasn't tasted defeat since a failed, mid-2008 "Fight of the Night" title shot against popular UFC champion Georges St. Pierre.

Despite all this, Fitch's name is rarely brought up in contender discussions.

Instead, the 33-year-old is set to face nineteenth-ranked welterweight prospect Johny Hendricks at UFC 141 for his first appearance since February, and he's not happy about it.

In an interview with MMA Weekly Radio, Fitch was unexpectedly blunt when questioned about his perceived slights.

"I really have no idea. No one's every come to speak to me about doing anything wrong or right or whatever, so I'm completely clueless.

"I have no idea what's expected of me to get the title shots. No one's ever come to me and said they don't like what I'm doing or I need to do more of something else. I'm utterly and completely clueless in that regard."