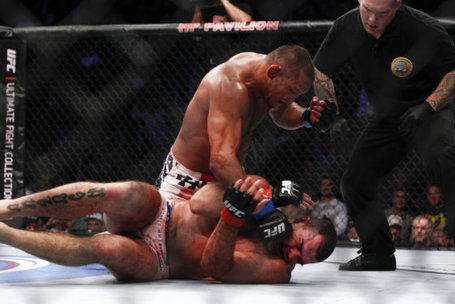 According to Dave Meltzer of The Wrestling Observer, the very early pay-per-view buyrate numbers for UFC 139 are in. The (provisional) verdict? 270,000 buys. That is not a strong buyrate, but that shouldn't be surprising.

I was debating with pundits and fans alike about what sort of buyrate this event would do. My sense was it wouldn't clear 350,000 buys. Even after the final numbers come in I still don't expect that threshold to be reached and that's assuming the final number doesn't drop from 270k.

The central debate was whether or not UFC on Fox, which took place a week before UFC 139 and featured some advertisement for the pending event in tradition ad spaces (that is, between actual Fox content), would give a boost to UFC 139. After all, the ratings for the UFC's debut on Fox were very positive.

I never bought UFC on Fox would buoy UFC 139. Much of the event was spent giving Brock Lesnar visibility and presumably, his next fight with Alistair Overeem at UFC 141. That UFC 139 ads aired on Fox is true, but beside the point. Did they air when the most amount of audiences were tuned in? And even if they saw it, was there anything in the ad to whet their appetite? Do most casual fans even care about Dan Henderson fighting Shogun? 30-second ad spots don't do much except tell you 'there is a UFC event on this date; these fighters (which you may or may not have heard of) are competing'. Highlight reels are better than watching paint dry, but there isn't a ton of evidence to suggest those ads uniquely placed sell pay-per-views (with the obvious exception of that the more pre-fight ads that air, the more buys you can expect). And if you're a sports fan who watches ESPN or other sports-related content, that probably also wasn't the first time you saw the ad.

More to the point, that UFC was free the week prior to UFC 139 in no way served UFC 139's interests. Some suggested if it's free the week before, more would be likely to buy the week after. Not true. The issue isn't whether or not folks would have to pay twice in two weeks; it's a question of appetite for UFC events generally.

For most casual fans, they're all too happy to take in UFC on Fox and forget about UFC 139 the following weekend (and that's assuming they even knew it existed or cared). The ads for UFC 139 were little more than white noise. Had UFC on Fox been three weeks apart from UFC 139 and been more direct about setting up UFC 139 with discussion or advertisement during the UFC on Fox broadcast itself, the story might be different.

This isn't to suggest UFC on Fox isn't doing what's set out to do, namely, promote upcoming UFC pay-per-view events. Over time it may. But in the short run, UFC on Fox events will be about setting up specific fighters or specific events. And those events will get more treatment than commercials between actual UFC on Fox content segments.