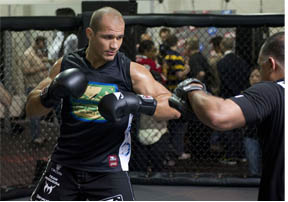 Junior dos Santos is a man of many talents. Despite sporting a brown belt in Brazilian Jiu-Jistu, the UFC champion has quickly emerged as one of the heavyweight division's fiercest strikers, earning six of his eight Octagon wins by way of smashing.

Now, with the UFC belt finally in tow, dos Santos would like to add "Olympian" to his quickly expanding résumé.

In a recent interview with UOL Esportes, the Brazilian contemplated his chances of boxing at the 2016 Olympic games (translation via Bloody Elbow).

"The more goals you reach, the bigger your dreams become," dos Santos said. "I'd like very much to test myself in boxing. In the gym I train boxing a lot and I see it as a sport that brings something different. You have to be more loose and faster. If the opportunity arises, I'd like to try it, but first I have to defend this (UFC) belt."

The notion is no pipe dream. Dos Santos's acclaimed boxing coach, Luiz Dorea, believes the 27-year-old could succeed if he decided to pursue that route.

"What he does in joining forces with heavyweight movement is unusual. He moves like a lightweight fighter. He would have a chance to win a medal in Olympic boxing," Dorea said. "To have Junior fighting at the Olympics in Rio de Janeiro (in 2016) would be a dream, but today his priority is MMA."