Share All sharing options for: UFC 139 PHOTO: Judge's Scorecard And CompuStrike Stats For Henderson Vs. Shogun 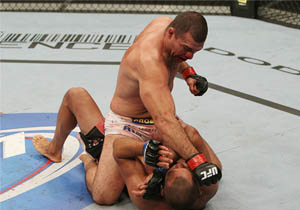 Lost in the spectacle of Saturday's main event was the ensuing debate about the rationality of the judge's scorecards.

Nearly everyone within the mixed martial arts community had an opinion about Dan Henderson's emotional decision victory over Mauricio "Shogun" Rua, including UFC President Dana White.

"This is one of those tough fights," White mused during the UFC 139 post-fight press conference. "In the first round, they both knocked each other down. You give Henderson the first three rounds. You give Shogun four, and you give Shogun a 10-8 in the last round for a dominant round; it's a draw. It's one of those tough ones but that's how I scored it. I scored it a draw. But who the hell am I?"

Though the judge's saw it differently, as evidenced by the official scorecard below. (via MMA Weekly) 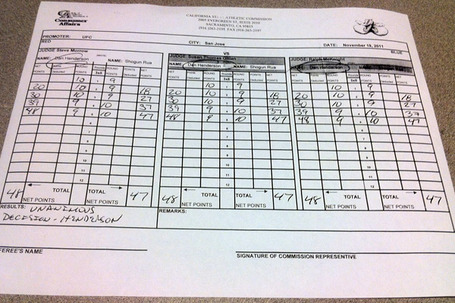 Regardless, while the sport's ongoing struggle with state-commissioned judges remains, it would be criminal if it detracted from the legendary performance these two men put on display Saturday night.