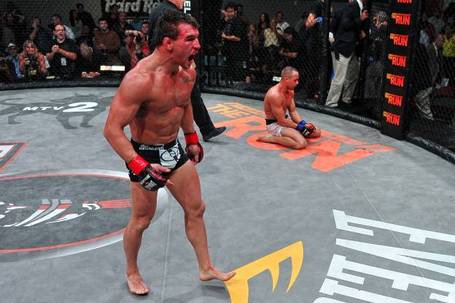 It was a special evening for the hardcore MMA community last evening. Two cards that likely went unnoticed by the larger casual audience showcased two of the best fights in some time, one maybe of all time. We'll get to UFC 139 later, but Bellator 58 deserves some recognition. Their main event was a sight to behold. And if you missed it, you'll get another chance. I called it last night and while I'm sure I had nothing to do with it, Bellator decided to follow through and put last night's incredible lightweight title fight between Eddie Alvarez and Michael Chandler on YouTube.

Full fight video after the jump.

To help relive more of the action, here's Bloody Elbow's live blog of the event:

Round one:  Chandler is coming forward hard, and hitting Alvarez with a flurry of punches that has him rocked.  He gets Alvarez down but Alvarez is back up pretty quick.  Alvarez connects with a good right, but Chandler is comign forward and swinging hard.  Another right from Alvarez.  Chandler is still coming forward, and lands a combo.  Alvarez lands another good shot.  Chandler goes for a takedown but can't get it.  They trade, then alvarez gets Chandler on the cage.  Chandler goes for a takedown, gives up his back, but gets out and they're back up!  Alvarez lands a good left, then another.  Knee to the head from Alvarez.  Chandler comes in with a combo that looks good, then another.  Alvarez eats a right but comes forward and lands another combo.  Chandler catches Alvarez again and he's rocked!  Chandler comes in to try to finish but the round ends!  I have no idea how to score that round.  Fantastic.  I would almost say 10-9 Chandler.

Round three:  Alvarez lands a couple of little jabs.  He is moving forward more now.  Alvarez swings and misses, and ends up with Chandler on the cage briefly.  Chandler lands a good left but eats one in the process.  Alvarez with several body shots, then tries a guillotine briefly.  Alvarez is coming forward with some good shots and Chandler looks hurt.  Chandler is just hanging on the cage while Alvarez hits him.  Chandler shoots but Alvarez gets out.  Chandler looks bad now.  Alvarez is unloading on him.  Chandler throws a good right but misses.  Now Chandler is taking shot after shot from Alvarez, he rallies enough to land some good shots then shoots.  He can't get the takedown, but it keeps Alvarez from beating on him for a little bit and gives him time to recover if he can.  Not sure what happened to Chandler this round.  End of the round, 10-9 Alvarez.

Round four:  Chandler is looking a little better now.  He is swinging and missing though.  Alvarez is landing some combos.  Chandler lands a right and is coming forward again.  He shoots but can't get a takedown.  Now both guys are landing good shots.  Chandler lands a great right that gets Alvarez down, and Chandler is going for gnp.  Now in full mount and is trying to land elbows.  Alvarez gives up his back, Chandler gets the choke, and Alvarez taps!! Wow!!  Michael Chandler def. Eddie Alvarez via submission (rear naked choke), 3:06 of round four