It was a rough night at UFC 139 for former Strikeforce middleweight champion Cung Le. He'd been out of competition for 18 months and isn't exactly a spring chicken at age 39. After winning a relatively close first round against the equally out-dated Wanderlei Silva, things went south in the second frame. Silva was able to crowd Le against the fence and once he had the AKA-trained fighter hurt, things went from bad to worse. More specifically, incredibly facial damage was done. It appears to be a knee that did the rearranging, but whatever the case, it harkens back to the days of Rich Franklin vs. Anderson Silva. I cannot feel pity, though. As B.J. Penn once said, 'if you like the way you look, this is not the sport for you."

Full photo of Le's positively destroyed nose after the jump. 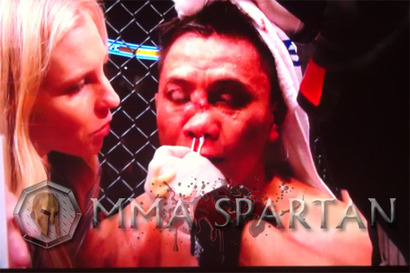