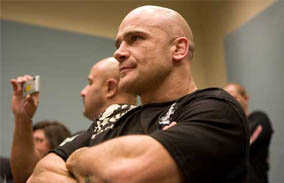 Alistair Overeem's ongoing war with Golden Glory management isn't going away anytime soon. With lawsuits from both sides already in the works, and haphazard mud-slinging becoming a weekly occurrence, it appears this issue will only get uglier before it is resolved.

Earlier this week, mixed martial arts legend Bas Rutten tossed his two-cents into the fray, and suffice to say, he won't be getting a Christmas card from Overeem anytime soon.

In an interview with Paul Lazenby, Rutten explains his half of the story and the outrage he felt watching from the sidelines.

PL: Strikeforce, K-1 and Dream champion (and your fellow countryman) Alistair Overeem will be battling Lesnar on December 30th with a UFC world title shot at stake. There has been a lot going on with Overeem lately, including the shocking news that Alistair was leaving the Golden Glory team and firing his managers. Have you discussed any of this with him, maybe found out his reasons for doing it?

BR: Oh no, you didn't go there! (laughs) I thought that if nobody asks, I won't say anything, but now that you ask me I have to! It's been bothering me a lot! OK, here I go.

It's a money thing. He simply doesn't want to pay the people who made him. When he lost three fights in a row...well, like pretty much 5, I mean, he lost, won, lost three times in a row, won, and lost again...and nobody wanted to have him.

But his management kept pushing and using the power that they have because they have other great fighters. Like, for example [they would say]: "If you want Semmy Schilt to fight, then you have to take Alistair as well."

It's funny how fighters think. When it goes bad with them, their team is everything to them, and they love their team. In interviews after they win a fight, they say: "I owe everything to my team". Then when the management starts to put great fights together for them, directing their careers and the fighter gets better and better, some of them simply can't handle it, and it gets to their head.

I had a bad feeling already when he called himself, after he won the K-1 Grand Prix, a "legend". He actually said in an interview right after he won: "I am a legend now". I don't think a fighter can ever make that comment about himself.

And talking about the Grand Prix, let's face it, he had a great deal of luck as well there. He fought Peter Aerts who had a WAR with Semmy Schilt [previously that night] and was completely banged up, and then he fought [Gokhan] Saki, who had a broken arm AND hand, in the finals! At that moment when you win, you should say: "I'm very happy with the result, the stars were in line for me tonight, I also got a little bit of luck". Because everybody is going to say that about you anyway, you might as well simply say it yourself to keep the people respecting you, but NOT: "I'm a legend".

PL: Wow, sounds like you're genuinely pissed off at Alistair about this.

BR: Of course, I see it too many times. I KNOW what Golden Glory did for him. He couldn't punch or kick when he came to them, and I mean, HE COULDN'T PUNCH OR KICK! Some fighters get big and then forget who was fighting for them when they were losing. Two months ago, he wanted to make a belt for the Golden Glory team with "FOR CHAMPION MANAGEMENT" engraved on it. Those were HIS words after they made this huge contract for him, and now he says they are morons? He used them to negotiate the best deal and when they did it, now suddenly they are morons? Explain that to me. It's unreal.

Also, a few months ago, when they started to get close to a good deal with the UFC, he realized that he could make a lot of money. The first thing he did was go to Cor Hemmers, his striking coach, and tried to renegotiate the 10% trainer's fee.

You have to understand, [a deal like Alistair's UFC contract] is a dream for trainers, because there is a possibility that they create, with the help from management of course, a fighter who can make some REAL money for them. Because let's face it, most trainers don't live in a huge house, don't drive a big car, they do it for the love of the fighter they train. They put their whole heart and soul in there.

When a fighter's lost three in a row, and there is no hope for him, the trainer is always there for him, helping him again and again, and the management is trying to find fights for him. Understand as well that trainers like Cor Hemmers and Martijn de Jong are busy with the fighter 24 hours a day. I talked to Cor in the past and he told me he couldn't sleep from all the tension, and about thinking: "What's the best game plan for Alistair?" Also know that when Alistair [first] came to Cor, when he would get hit, he would turn his back to his opponent and didn't want to fight! You saw that when he fought his first K-1 fight in Holland, it was very bad. And when he was losing, [his trainers] were the ones who convinced him to go heavyweight since he was cutting way too much [to make light-heavyweight].