Share All sharing options for: Junior Dos Santos Sleeps With His UFC Belt On The Round-Up

MMA Nation Round-Up provides you with daily coverage of the latest in news, multimedia, and analysis throughout the world of combat sports. This morning we continue to revel in the fuzzy afterglow of UFC on Fox before looking forward to Saturday's UFC 139 offering. Plus, a certain champion has an after-hours rendezvous with his new toy.

- Saturday's UFC on Fox broadcast was met with near-universal praise in almost every facet except one: the one-hour, one-fight runtime. Luckily, it seems UFC officials have already taken notice of the criticism in a big way.

- As UFC 139 headliner Dan Henderson prepares for his third UFC stint to commence, he sat down for a revealing interview with Clinch Gear Radio's Jeff Dotseth.

- Upon first glance, Mackens Semerzier's loss to Robert Peralta at UFC on Fox was just your run-of-the-mill knockout. However, after further review, it's clear an inadvertent headbutt was the cause of the finish. Now Semerzier has filed to have the result overturned.

- Take a look for yourself. 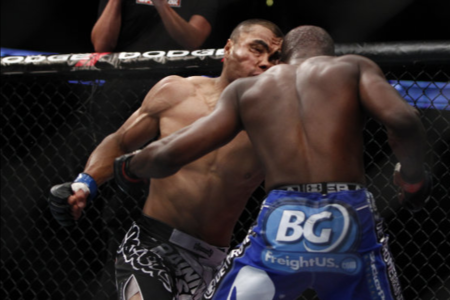 (Gif via Zombie Prophet of IronForgesIron.com; Photo via Esther Lin of MMAFighting.com)

- Junior dos Santos' post-fight interview with Joe Rogan was an incredible moment. As the massive Brazilian emotionally broke down in the center of the cage, affirming years of hard work, his overt joy was as heart-warming as it gets. So why should it stop after he leaves the cage? According to dos Santos' wife, it didn't.

- Urijah Faber is confident heading into his UFC 139 battle with former WEC bantamweight champion Brian Bowles. Said Faber: "I think I am a little bit faster and a little more elusive and can be more creative in there. I know I will probably frustrate him a bit."

- Of course, one man of infamy couldn't help but throw his two cents in when asked about Manny Pacquiao's near-loss against Juan Manuel Marquez last Saturday night. Said Floyd Mayweather Jr.: "The fight could've happened the way it happened because, you know, someone is slowly changing so they can prepare to fight me. They know they're going to have to take the random blood and the random urine tests."

- On Monday a fan on twitter posted his surprise after realizing Aaron Simpson was Cain Velasquez's college wrestling. Ryan Bader couldn't help but chime in, much to the ire of Simpson.

- We'll leave you with the latest Anderson Silva commercial for Ford's Brazilian marketing push. Pucker up.

Looking Back At UFC On Fox And Pacquiao Vs. Marquez 3 On The Round Up