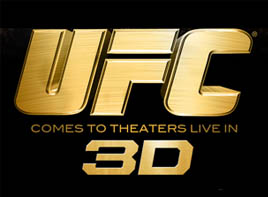 Depending on their reluctance to drop $50, fight fans are probably used to watching weekend UFC pay-per-views at a crowded sports bar or within the comfortable confines of their own home. However, starting in the early Spring, a new way to watch mixed martial arts is peeking over the horizon, and it could help save a struggling industry.

Kicking off on February 4th, UFC fans will be privy to live 3D pay-per-view showings inside select movie theaters. Besides signaling another innovative step by Zuffa, it's a partnership sure to assist a once-mighty enterprise clawing for relevance. USA Today explains:

The number of (theater) tickets sold, according to Rentrak's media measurement service, has dropped nearly 15% to 1.34 billion from 1.57 billion in 2002. Potential moviegoers, with high-definition, big-screen TVs at home and Netflix accounts are proving tough to pry off their couches.

If this year has proven anything, it's that the UFC is a demographic draw on whatever medium they choose. By promoting live events on massive, high-definition projection screens, floundering theaters will likely snatch a large portion of that demographic.

"It speaks to a transition in the industry," said director of media and research at the National Association of Theatre Owners, Patrick Corcoran. "Anything that can be transmitted digitally, you can show in theaters."

For more on this story, visit ufc3d.cinedigm.com.