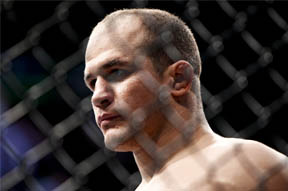 Leading up to Saturday night's UFC on Fox mega-event, UFC President Dana White often remarked that he would "die" if anything happened to his two heavyweight contenders before they could enter the cage for the promotion's network debut. Little did White know, Junior dos Santos had done that very thing, tearing his meniscus just eleven days before putting on the performance of his life.

That's right. Dos Santos somehow had a hobbled knee as he knocked-out Cain Velasquez 64 seconds into their headlining title bout. Ariel Helwani had the details from the post press conference scrum.

@arielhelwani
Ariel Helwani JDS and his dr. just confirmed that he tore his meniscus 11 days ago, was on crutches for 2 days after. Couldn't walk.
Nov 13 via EchofonFavoriteRetweetReply

If the report is true, it only ratchets up what already was a stunning display from the UFC's newest heavyweight kingpin. MMA Nation Editor-In-Chief Luke Thomas succinctly summed up the action in his UFC on Fox play-by-play.

ROUND 1 - Both fighters come out orthodox. Right hand by dos Santos that touches but doesn't do much. Outside leg kicks already by Velasquez. A monster overhand right from dos Santos sends Velasquez to the mat. Cain just crumbles. Most of the follow up shots from dos Santos miss, but as soon as Velasquez goes belly down referee John McCarthy steps in. That's it folks. Junior dos Santos is your new UFC heavyweight champion.

Photo by Esther Lin for MMAFighting.com.