Share All sharing options for: UFC On Fox: Alistair Overeem Breaks Down Velasquez Vs. Dos Santos 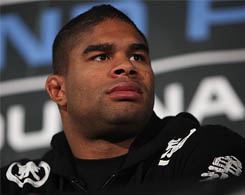 Alistair Overeem has a rather large stake in Saturday's UFC on Fox main event. The massive Dutch striker, should he best former champion Brock Lesnar, will battle the winner of Cain Velasquez vs. Junior dos Santos for the UFC heavyweight throne.

On the eve of the event, Overeem took a moment to break down which man he believes will emerge victorious. Video after the jump.