Share All sharing options for: UFC 141 Poster: 'It Doesn't Get Any Bigger Than This'

Pretty strong marketing for the big December event featuring Brock Lesnar and Alistair Overeem. This is one casual fans are already discussing at the water cooler at work. While Junior dos Santos and Cain Velasquez battle to see who the best heavyweight in the world is, these two will compete for the next title shot. The fight marks the UFC debut for Overeem, currently the K-1, DREAM, and Strikeforce heavyweight champion. The two heavyweights will carry the complete show on their broad shoulders. No other significant box office forces will appear on the card. The poster itself plus the complete fight card after the break. 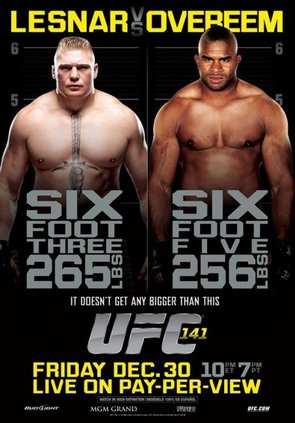