Share All sharing options for: Charles Barkley Is A Big Fan Of UFC Champ Frankie Edgar 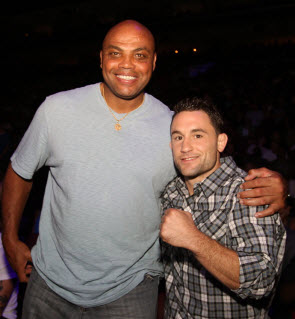 Here's a pic of basketball great Charles Barkley with UFC champ Frankie Edgar at UFC 133 in Philadelphia. Barkley was also cage side last night in Houston watching Edgar defend his title against Gray Maynard at UFC 136.

The 6'6", 250 pound (in his playing days) Barkley towers over the 5'5" 155 pound Edgar. Barkley was a feared scrapper in his days as a power forward for the Philadelphia 76'ers and certainly had the physique and athletic gifts to have been formidable heavyweight in his younger days.

But unlike his fellow NBA legend Shaquille O'Neal, Barkley has never made a show of talking about fighting inside the Octagon. Shaq has called out Korean fighter Hong Man Choi and is even featured in the UFC Undisputed 2010 video game as a playable character.

At some point in the future, MMA may compete with pro basketball for the most athletic of the big men, but in the mean time expect to continue enjoying the best MMA from the smaller men's divisions.