Share All sharing options for: Is Guram Ever Coming? Top Prospect Again Pulled From M-1 Card 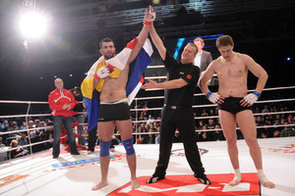 Guram Gugenishvili, one of the best heavyweight prospects in the sport, is once again being pulled from an M-1 Challenge event on Showtime. Guram, a Georgian who trains in the Ukraine, is an exciting grappler. One day, perhaps, circumstances will allow him to show it to an American audience.

After suffering a training injury to his elbow and arm, #1 heavyweight prospect and reigning M-1 Global champion, Guram Gugenishvili has been forced to withdraw from his title defense at M-1 Challenge XXVII Friday October 14th.

Gugenishvili, who had moved the final phase of his training camp to Xtreme Couture in Las Vegas, was injured on Wednesday evening during wrestling drills. Guram landed badly on his elbow while training with a sparring partner, preliminary tests today resulted in him not being cleared to fight, with additional tests being scheduled to determine the full extent of the injury. Guram is expected to be sidelined for at least 4 to 6 weeks, and might not be able to return to the ring for 3-5 month in order to fully recover. Company officials stated that they are optimistic that Gugenishvili would be able to defend his title and make his Stateside debut later this year.

In the meantime moving into an Interim Title bout with Kenny Garner (7-3) is the Russian Red Devil Sport Club heavyweight, and sparring partner of Fedor Emelianenko, Maxim Grishin (11-5).

M-1 Challenge XXVII: Garner vs Grishin will feature bouts from the new 5,500 seat Grand Canyon University Arena in Phoenix, Arizona will air LIVE on SHOWTIME on Friday, October 14 at 11 p.m. ET/PT (Delayed on the West Coast).