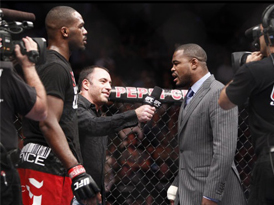 In the lead-up to UFC 135, many felt that 'Rampage' Jackson got the upper-hand in media exchanges, painting Jon Jones as a cocky, immature kid. While it clearly didn't matter come fight time, the swarm of negative attention was still a foreign situation for the young champion, and one he seemed to learn from. This time Jones wasted no time getting on the aggressive as he set out to tell his side of the UFC 140 story.

In an interview with MMA Fighting, Jones flipped his savvy on and ripped into his rival for what he deemed as foul play. After being told for the better part of the year that he ducked Rashad Evans by pulling out of their scheduled bout in late April, "Bones" turned the tables, lambasting his former friend for the exact same affront.

Did you tell the UFC that since Evans wasn't ready to fight in December that you would rather wait a month or two to fight him so you can finally put this beef behind you?

Well, Dana White basically needed someone to save 140. I didn't necessarily want to fight at 140, but because it was Rashad, I said, 'You know what? I would take the fight in nine weeks.' I'm already in shape. I already know what I want to do. Rashad, predicting that I would say no, he kind of kicked himself in the butt because I said yes, he turns around and says, 'Oh, I didn't expect Jon to say yes. I don't want to fight him that soon.' So in reality, he's kind of the one who's ducking the fight. I feel like he's ducking the fight.

He tried to call me out on nine weeks' notice. Obviously, who wants to fight on nine weeks' notice? I just got a new car, I want to drive that around. I want to hang out with my family and relax and sleep in my own bed for once. And now Rashad calls me out, predicting that I would say no, to make me look like I was ducking him again, and I say yes, and now he says, 'Oh, I didn't know he would say yes. I don't want to fight him.' He called Dana White, asked for 140, Dana White called me and said Rashad wants this fight. I gave him the fight he wanted and then he pulled out.