Share All sharing options for: PHOTO: BJ. Penn And Nick Diaz Together Post-UFC 137

For former UFC lightweight and welterweight champion B.J. Penn to announce his retirement after the shellacking he suffered at the hands of former Strikeforce welterweight champion Nick Diaz indicates a profound level of disappointment, embarassment and self-awareness. UFC President Dana White is probably right when he says Penn could later change his mind.

Yet, despite personal anguish, Penn found time post-fight to lick his wounds with Diaz. For those of us who've long admired Penn as much for his ferocity as his fight IQ, this small snapshot in time brings a little comfort.

Photo after the jump. 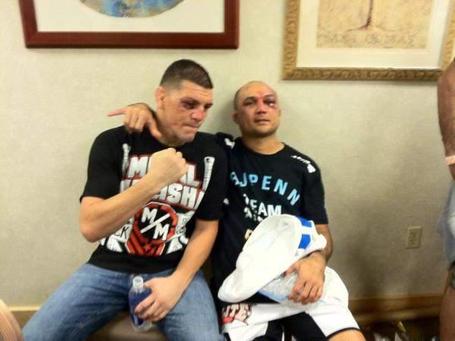