Ricky Hatton Next Fight Not In MMA, Although 'Hitman' Still A 'Big Fan'

Share All sharing options for: Ricky Hatton Next Fight Not In MMA, Although 'Hitman' Still A 'Big Fan' 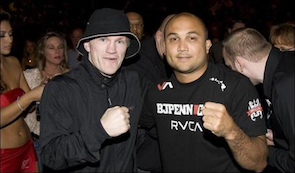 Count former professional boxing champion, Ricky Hatton, among the many from the "Sweet Science" who are impressed with the rise of mixed martial arts (MMA) and its talented crop of fighters.

"Hitman," 32, recently spoke with Fight Hub TV about his continued admiration for the fastest growing sport in the world, but doesn't like it enough to possibly make a new career out of it. However, Hatton, who officially retired earlier this year, reminds us that boxing can learn a lot from MMA from a promotional aspect.

Hear his latest remarks on MMA in the full entry:

"The more I watch [MMA], the more I become a bit more of a fan. Not really [interested in pursuing a career in MMA]. I don't know about looking at somebody's fists, never mind their feet, elbows and knees.... I'm a big fan. I was a very physical boxer, so something like that is right up my street. The more popular it gets, the more you look into it. These are proper, professional athletes now who work hard and dedicate themselves. I take my hat off to them.... Boxing can learn a lot from mixed martial arts. You go there and they create an atmosphere with the ring entrances, music and everything like that. In this financial climate you have to pop something out there that sells, so from that point of view, boxing can learn from the mixed martial arts."

Hatton ended his career after a devastating knockout loss to Manny Pacquiao in 2009, which sent him into a downward, substance-abusing spiral that consumed the British brawler for more than a year. He entered a rehab facility in 2010 to treat his battles with drugs, alcohol and depression.

Despite his recent struggles outside the ring, Hatton was a beast inside it during his prime.

So much so that UFC Hall of Famer Randy Couture offered to "get him up to speed" with other aspects of the sport in exchange for his boxing knowledge back in 2008 when Hatton initially revealed his interest after attending UFC 91 alongside former UFC champion B.J. Penn.