Rich Franklin: I Don't Regret Any Decisions I've Made

Share All sharing options for: Rich Franklin: I Don't Regret Any Decisions I've Made 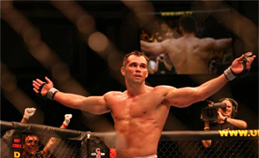 Rich Franklin has had a fascinating career. The former kingpin of the UFC's middleweight division was thrown to the wolves after being uprooted by Anderson Silva, left to fight an endless stream of top opponents at anywhere from 195 pounds to 205 pounds. Now, at 37 years old, Franklin's time in the sport is inching towards its final chapter, but he doesn't regret a single moment.

In an interview with Bloody Elbow's Matt Roth, "Ace" thoughtfully mulled the prospect of if he should have been more selective with his opponents instead of being "Mr. Reliable".

I'm sure there were situations in my career where I took some fights that I shouldn't have, but it's not the way I operate. I've turned one fight down in my career and that was when I fought Matt Hammil. Prior to Matt Hammil they offered me Reese Andy and I was using Reese as a training partner up in Seattle and basically when they offered me that fight I said "I can't, I've been training with this guy for the past six months". That's the only fight I've ever turned down and they found a replacement who was a similar opponent. There have been times in my career where I've been sick and I probably should have pulled out of fights or took fights when I shouldn't have and all these kinds of things. That is what it is. Those are decisions I've made. I don't regret any of them.