Nick Diaz has done some remarkable things in his MMA career. Jonathan Snowden breaks down the UFC contender's top ten moments inside and outside the cage.

There's a good chance Nick Diaz will wow us Saturday night at UFC 137. The Strikeforce welterweight champion always seems to. Whether its extracurricular brawling, taunts galore, exotic submissions, or just plain excellence, Diaz never fails to delight. But whatever happens against B.J. Penn, it would have to be pretty special to supplant any of these moments from the Diaz highlight reel. Without further ado, let's run down Nick Diaz's top ten moments.

Lawler was the UFC's golden boy. To Dana White, he could do no wrong. People compared him to Tyson with a straight face. Leave it to the kid from Stockton to open up eyes. Diaz, a grappler by trade, stood toe to toe with the dangerous Lawler. Not only did he beat him at his own game, he talked a better game too. Although it was his second UFC fight, it was the first time fans got to see the real Nick Diaz.

In his first run as an MMA champion, Frank Shamrock was the best fighter in the world. In his second run, years later for Strikeforce, Shamrock had to settle for being the best fight promoter in the game. He worked wonders building interest for fights with Phil Baroni and Cung Le. Diaz was no different. He just had to show up and be Nick Diaz: Shamrock would take care of the rest. The fight was a one sided beatdown. The build though? That was a thing of beauty.

Karo Pariysan's potential seemed unlimited. Before depression and drugs sidetracked a promising career, he had a series of great fights, including a beauty with Diaz at UFC 49. The grappling exchanges had to be seen to be believed and both men left the cage bigger stars than they entered it. A great fight.

Not to be confused with Nashville which Jason "Mayhem" Miller is determined to make sure no one ever forgets. This one went down in Hawaii after K.J. Noons spanked Yves Edwards in under a minute. Diaz, a Noons victim the year before, was looking for a rematch that Noons was loath to grant him. I described the melee for Total MMA (the web page, not the book):

Diaz hit the cage in pure heel mode. Noons was fresh off the best win of his career and in front of his home fans. When he flashed the double finger salute to Noons, things got a little out of hand. Even KJ’s old man got into the action. "I’m kind of disappointed that those antics overshadowed a great athlete like Yves Edwards," Noons said after the fight. "You train so hard for a title fight and then you’ve got this low class person coming in and talking trash."

When the dust settled, Elite XC had just hyped a new main event match.Diaz is the kind of fighter that draws a natural reaction, with a painted on sneer and a bad attitude. Noons is like the prototypical 70’s wrestling babyface. He’s probably got a great dropkick to go along with that pretty right hand. It’s the perfect matchup. So, of course, the MMA media hated it. Diaz interrupted one of those shows of mutual respect hardcore fans find so loveable and regular fans turn the channel on. It just kind of underscores an ever pertinent point: if MMA writers ran MMA companies, MMA companies would be run out of business. Heated feuds draw money.

Diaz spoke for a lot of UFC veterans when he criticized Sanchez and other products of The Ultimate Fighter. It's hard to imagine now, but there was the idea at the time that the reality television stars weren't real fighters yet and didn't deserve prominent roles in the suddenly thriving UFC. Sanchez flushed that notion down the toilet by beating Diaz in the cage.

A lot of people think Nick Diaz should have been awarded the decision over Joe Riggs after 15 hard minutes at UFC 57. But really - it's hard to care too much considering what was to follow. Both men left that night to go to the hospital. That's how grueling the fight was. But Diaz was undaunted. Hospital gown and IV be damned, he was getting one more shot at Riggs. It was the UFC's first hospital bout, a good idea for a gimmick match when times get tough.

You'd have to be high to invent the gogoplata. Wikipedia breaks the hold down like so:

That's wild enough. Now imagine trying it on Japan's best fighter Takanori Gomi. It's the kind of stuff Craig and Smokey would dream of doing to Deebo. You'd have to be beyond high. Which, of course, Diaz was. After testing positive for marijuana, Diaz's epic win was turned into an official no contest. But it is still an epic win in the court of popular opinion. 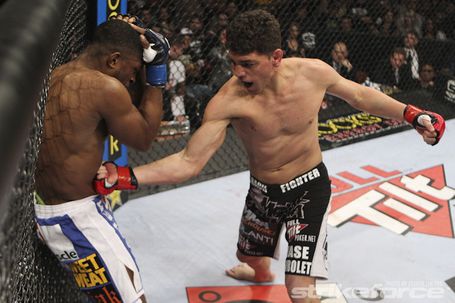 The action encompassed everything possible in mixed martial arts - punches, elbows, knees and grappling all played major roles. But in the end it was heart and determination that proved the difference. Diaz was dropped twice by one of the hardest punchers in the welterweight division. Like a true champion he refused to let that stop him.

Yes, there is some question about an early stoppage. It's almost a shame "Big" John McCarthy stopped it when he did - because it looked like it was going to develop into an all-time classic. But that's what might have been. Let's celebrate the five amazing minutes we did get. One of MMA's unique fighters once again put his stamp on an event. Love him or hate him, Nick Diaz is a fighter like no other. I'm happy to have him in the sport.

1. The Brawl to top them All

Some people hated this, calling it a dark mark in MMA history. But a Gus Johnson reminded us all that these things, well, sometimes they happen. Jason Miller came into the cage after Jake Shields beat up an aging Dan Henderson to demand a repeat of a fight that put Chicago to sleep months earlier. He got a fight, just not the one he was asking for. Now Miller wants Diaz, who as you can see, had no problem with throwing hands with the Bully Beatdown host in the Strikeforce cage. Time will tell if the two men will ever do battle. I certainly hope so. Something good has to come out of that mess in Nashville.