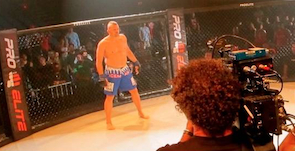 Former UFC light heavyweight champion Chuck Liddell will return to the cage this Monday night (Oct. 24, 2011), taking on Steve McGarrett in a charity mixed martial arts (MMA) "fight to the finish" that will air on the CBS network at 10 p.m. ET.

No, "The Iceman" is not coming out of retirement, he's making a special guest appearance as himself on "Hawaii Five-0," which is a television series about an "elite state police unit/task force set up to fight crime in the state of Hawaii."

Liddell, a UFC Hall of Fame inductee who was forced into retirement in 2010 after losing five of his last six fights, steps inside the ProElite-branded cage to battle McGarrett -- the leader of the Five-0 team -- who is investigating the murder of a wealthy business owner.

To watch a teaser video of Liddell, who now serves as UFC Executive Vice President of Business Development, in action on the set of "Hawaii Five-0," click here. This is not Liddell's first foray into acting -- he's also appeared on the set of "Drillbit Taylor," "Entourage" and "Blue Mountain State," among other small bit parts.