Share All sharing options for: Quinton Jackson Gets A Very Expensive Lamborghini 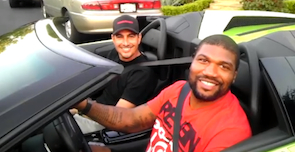 At least as far as sticker prices are concerned.

Jackson recently received a new Ecto Cooler green Lamborghini sports car from his primary sponsor, MusclePharm, which is valued somewhere in the neighborhood of $300,000. That's about $100,000 more than what Jones recently shelled out for his 2012 Bentley Continental GT (see pics here).

MusclePharm's state-of-the-art, 35,000 sq. ft. facility in Denver, Colo., is where Jackson spent weeks training to get his 205-pound belt back. He was unsuccessful, losing via fourth round submission (rear naked choke). The luxurious gift demonstrates that if you win you win, if you lose you still win.

Watch a beaming Jackson talk about his new toy in the video below: