The Death Of The Arizona State Commission Whistle

Share All sharing options for: The Death Of The Arizona State Commission Whistle 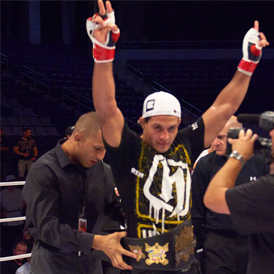 Commissions often get a bum rap in mixed martial arts, whether for poor decisions or refereeing mishaps. Though sometimes they can get things right, as is the case with the Arizona Boxing & MMA Commission. Just days after the fact, the cause of Friday night's chaos at M-1 Challenge 27 has been rectified.

As previously reported on MMA Nation, an odd choice of the Arizona commission became a more-than-minor subplot during M-1's first venture into the desert. Instead of utilizing wood clap to signify ten seconds remaining in a round, the commission elected to use a whistle. Of all the things in MMA to "fix," this decision ranked very low on the list.

As one would expect, the whistle threw everyone unfamiliar with the practice for a loop. Several fighters disengaged and walked away upon hearing its call, under the guise of the round ending despite time still remaining on the clock. One of those men was M-1 Global light heavyweight champion Vinny Magalhaes, who fell victim to the lure of the whistle not once, but twice.

"I've never heard that," Magalhaes explained to MMA Nation. "Usually it's the clap, like okay that's ten seconds. But whistles like that end the round, and I just walked away twice. That was pretty bad.

"It's not normal," he continued. "Anywhere I've fought, North Carolina, Ohio, California, Nevada, it's almost like a clap, not like a whistle. So I was just walking away. Luckily he didn't kick me in the head when I was walking away."

Fortunately, after all the ire aimed its way, the Arizona Boxing & MMA Commission has decided to make a change. According to reports from MMA Junkie, the whistle has been retired in favor of the standard ten-second wood clap (or cowbell).

Score one for common sense.