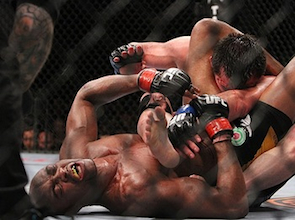 It's been more than a year since Chael Sonnen missed out on the opportunity of a lifetime to score the first-ever win over UFC Middleweight Champion Anderson Silva inside the Octagon.

He was literally two minutes away from certain victory before "The Spider" wrapped his long legs around his neck and forced Sonnen into submission. Prior to their confrontation, Sonnen embarked on perhaps the most ambitious trash-talking campaign in recent memory.

Even after the loss, as well as failing a post-fight test for performance-enhancing drugs, Sonnen has continued the drumbeat of brow beatings. However, his disrespectful tune surprisingly changed, albeit slightly, during the recent conference call to promote UFC 136:

"It's getting harder and harder to deny that [Anderson Silva] shouldn't be shown that appreciation. He ducked Okami for years, but he did finally go in there and he made it look easy. So I think you've got to look at that. If you're asking if I would ever conceive that Anderson's better than me? No, I would simply refer you to the tape. I think he and I's skills are vastly different. I think I could come down a lot and still be ahead of him. I also thinks he ducks and dodges opponents constantly. But, listen, his wins and losses speak for themselves and the fact of the matter whether I'd like to admit it or not is he's done a better job than anybody, he's done a better job than me and he is the champion. That doesn't mean that I'm gonna quit poking my finger in his chest. But, at some point I think fairness needs to kick in, too, and I think you need to look at what he's done and tip your hat to him a little bit."

Sonnen has not competed since the loss to Silva back in Aug. 2010. He's fulfilled a mandatory six-month suspension since that time, which prevented him from participating as a coach on The Ultimate Fighter (TUF) 14 opposite Michael Bisping.

He is currently scheduled to fight Brian Stann at UFC 136 this weekend at the Toyota Center in Houston, Texas. Sonnen has been remarkably silent in the build up to the showdown, revealing that he respects the "All American" too much to talk smack.

Enjoy it while it lasts because with a win on Saturday night, Sonnen will likely get back to doing what he does best, hurling insults and baiting Brazilians into brawls.