Share All sharing options for: Stefan Struve And Pat Barry Hug It Out At UFC On Versus 6 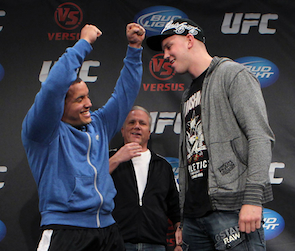 Stefan Struve and Pat Barry brought back the "bro hug" last night at the conclusion of their odd-looking heavyweight fight that served as the UFC on Versus 6 co main event.

The division's tallest fighter (Struve, 6'11) and its shortest (Barry, 5'11"), battled for more than eight minutes before "Skyscraper" locked in a fight-ending triangle choke that force "HD" into submission.

Immediately, Struve rolled over and smothered an exasperated Barry with a warm, awkwardly-long squeeze and whispered into his ear.

In the build up to their fight, the odd couple opted for compliments and smiles rather than smack and stink eyes. Sure, both fighters clearly wanted to win, but their mutual respect forced them both to take the promotional high road.

It didn't affect their performances inside the Octagon.

The pair still managed to punch each other in the face, exchange blistering kicks and inflict physical pain. Barry even admitted in his post-fight interview that he wanted smash the lanky Dutchman through the bottom of the cage with his last-minute powerbomb slam.

Certainly nothing a big hug between fast friends can't fix.