Share All sharing options for: Director Calls For Legalization Of MMA In New York On Grounds Of Free Speech 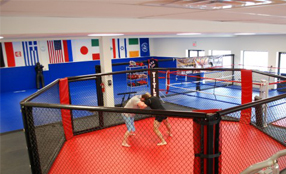 In this day and age it probably isn't too far off-base to believe that New York's legalization of mixed martial arts is no longer a matter of "if," but rather, "when." Yet despite that method of thought, the truth remains that the process still must start somewhere. David Mamet, director of the 2008 film "Redbelt," took to the New York Post to explain his solution.

Opponents of Mixed Martial Arts in New York state have enacted a statute to ban the exhibition its proponents hold is protected under the First Amendment as "artistic expression."

Now, as a longtime student and fan of mixed martial arts, I hope these opponents fail.

Is the practice of MMA an expression of free speech? Sure, if the beloved First Amendment protects not only the burning of the flag, but the government funding of "Piss Christ," a crucifix immersed in the "artist's" urine.

It might be argued that Andres Serrano's "Piss Christ" did not abrade the neighbors' bodies, it merely offended their sensibilities -- but if that is the test, the comparison to the injury rate of skiing and the above-named sports would exonerate MMA from the label of egregiousness.

The purpose of law, our Constitution teaches, is to allow people to interact free from government intervention.

To criminalize or otherwise sanction now this, now that, at the whim of a vocal minority is, retail, wearisome folly. Wholesale, it is the road to serfdom.