Share All sharing options for: UFC's Dana White = The 38th Most Influential Man Of 2011 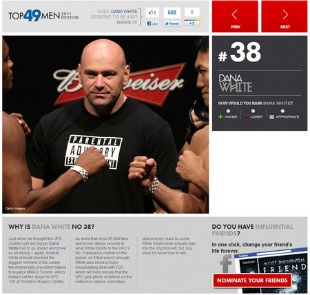 Askmen.com, the site Wikipedia calls the largest men's lifestyle website, has named UFC president Dana White the 38th most influential man in the world in 2011. Here's their description of the men on the list:

The men who made the list come from different walks of life, but they're all visionaries who completely in their respective fields. They not only challenge themselves to become Better Men every day, but they're dedicated to furthering the future of mankind (even Charlie Sheen, in his own strange way). These are the men history will remember as having defined 2011.

Here's the entry for White:

Just when we thought the UFC couldn't get any bigger, Dana White had to go ahead and prove us all wrong -- again. In what White himself deemed the biggest moment of his career, the charismatic president helped to legalize MMA in Toronto, which helped set the stage for UFC 129 at Toronto's Rogers Centre, an event that drew 55,000 fans and broke ratings records in what White insists is the UFC's No. 1 television market on the planet. As if that wasn't enough, White also inked a major broadcasting deal with FOX, which will help ensure that the UFC gets plenty of airtime on the network's various subsidiary channels for years to come. White might never actually step into the ring himself, but, boy, does he know how to win.

Here are the 37 men that beat Dana White: