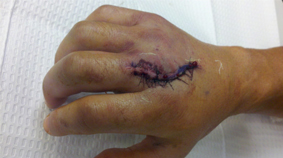 Midway through the first round of what would be a 25-minute fight with Demetrious Johnson at UFC on Versus 6, UFC bantamweight champion Dominick Cruz dislocated the middle finger his right hand, tearing various ligaments and tendons in the process. Though he battled through the pain to earn his fourth straight title defense, the aftermath was not as pretty.

By the end of the fifth round, the affable 26-year-old's hand was absolutely ragged. Following the fight, Cruz thoroughly explained his injury to ESPN.com.

It's basically the exact same injury I had on my left hand. Same knuckle, same everything. The tendon is completely ripped off the bone and my finger is popping out of its socket due to that. And the knuckle just dislocates when I make a fist. After I got the surgery on my left hand the doctor said it would be stronger. And it's true. It is stronger... He put an extra piece of tendon over the top of the knuckle so it's braced for impact... He did some voodoo stuff with it that he drilled a hole through the knuckle and tied it so tight that there's no way for that tendon to lift back up off the bone again.

I'm kind of weird where I feel if I don't say anything about it it's almost like it's not an issue. I mean, no matter what, am I going to quit fighting because my hand is busted?

Cruz finally completed the surgery process this week, sending this tweet out on Thursday afternoon.

As one could probably assume from the photo, the 135-pound champion will be unavailable until early 2012, when he will most likely defend his title against the winner of Urijah Faber vs. Brian Bowles.