'The Economist' Reports On FTC And UFC

Share All sharing options for: 'The Economist' Reports On FTC And UFC 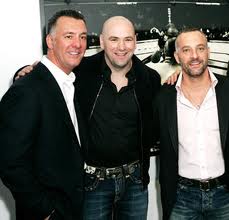 Despite its flourishing outer shell, the UFC remains embroiled within several internal conflicts, namely an ongoing dispute with the Culinary Union (CU) and an alleged anti-trust investigation by the Federal Trade Commission (FTC). A recent report by The Economist broke down the two clashes.

In the wake of the UFC's $40 million purchase of Strikeforce, The Economist reports the CU contacted FTC Director of the Bureau of Competition Richard Feinstein in late August to request an enquiry into the UFC's "widespread anti-competitive practices," with a focus on potential monopolization as well as the promotion's hardline stance on fighter freedom. However the CU is not directly affected by the UFC's operations, and thus The Economist attributes the aggressive play to a longstanding feud between the CU and Station Casinos -- a gaming company whose primary shareholders are UFC co-owners Frank and Lorenzo Fertitta. From the report:

The union freely admits that its campaign against UFC is intended to gain leverage against Station Casinos-particularly by disrupting UFC's efforts to be allowed to stage events in New York, where it is not yet sanctioned. But the government is taking the union seriously. On September 22nd an administrative judge at the National Labour Relations Board allowed more than 80 charges of unfair labour practices against Station Casinos to proceed to a full hearing.

In the midst of the dispute, the UFC might being facing even larger obstacles, as The Economist also claims an FTC antitrust investigation could already be well underway. Despite the $40 million Strikeforce deal falling short of the $66 million threshold required for investigation, reports indicate a retroactive investigation regarding abuse of monopoly power is on the table. Thus far UFC President Dana White has wisely evaded questions of the FTC anti-trust allegations, as clauses state that if he were to publicly admit their existence, the FTC would be allowed to openly discuss details of the case.

Ultimately, the whispers and speculation appear here to stay for the near future, as a definitive answer awaits miles over the horizon. According to The Economist, FTC investigations are not disclosed until approximately six months after activation, though the timetable is tentative and entirely dependent on the results of the case.