Share All sharing options for: Gina Carano Named To Esquire's 'Sexiest Women Of 2011' 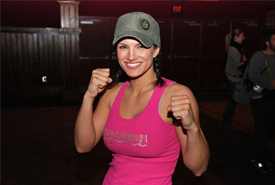 For someone who hasn't fought professionally since 2009, Gina Carano sure has become a strangely polarizing figure in mixed martial arts. Despite the former face of women's MMA moving on to greener pastures -- mainly Hollywood -- she continues to dominate the discussion, recently becoming the latest edition to Esquire Magazine's annual 'Sexiest Women of 2011' list.

Along with being included on the countdown, Carano also made the list as one of "Esquire's Achievers of 2011." This despite her only MMA appearance of 2011 ending prematurely after a mysterious removal from the Strikeforce: Overeem vs. Werdum card, which was scheduled to premiere as the first women's match under Zuffa ownership. Since then little has been heard from the Texan native, though the buzz for her latest feature film, Haywire, has picked up in recent months.

For having the guts of a fighter but not the body of one. For drawing the attention of Steven Soderbergh, who cast her in his new movie, Haywire, in which she - an MMA fighter - plays a spy who's as tough as she is lovely. And for unintentionally making Channing Tatum look like a good actor, at least in comparison.