Anthony Pettis: 'Get People Down, Hold Them Down And You Win Fights'

Share All sharing options for: Anthony Pettis: 'Get People Down, Hold Them Down And You Win Fights' 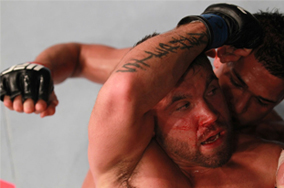 When UFC matchmaker Joe Silva tabbed Anthony Pettis vs. Jeremy Stephens for UFC 136, he, and virtually everyone else, anticipated the kind of fists-of-fury, stand-up brawl that usually defines a contest between two of a division's most talented young strikers. Little did Silva know just how wrong he would be.

What ensued was anything but expected. Pettis, a former WEC champion nicknamed "Showtime" for his flashy style, stymied the powerful Stephens with a blend of suffocating wrestling and mat work, effectively gunning for a win on the scorecards for the first time of his thrilling career. What was supposed to be one of the night's high points had become a footnote, and afterwards Pettis was none too happy with his game-plan.

"I'm happy that I got the victory but for me it was like a mental loss because I know I can perform much better than that. I really wanted to focus on my wrestling and my top game against Jeremy and show everyone that I am well-rounded and that I do have wrestling. I think I did that, but I also think I could have done better."

Standard fare for fighters off disappointing performances. But what the 24-year-old said next was perhaps the most revealing.

"When you go to the UFC it's not all about 'showtime' kicking or knocking everybody out. Get people down, hold them down and you win fights."

"Get people down, hold them down and you win fights." It's a sentiment that many fans and media members have vocalized, but never a fighter, and especially such a high-profile guy as Pettis, who was once in line for the lightweight title before being derailed by a similar wrestling clinic from Clay Guida. As point fighting and the "hold them down" mentality becomes more prevalent, both fans and the UFC brass -- who pride themselves on delivering entertainment above all else -- will surely find their tolerance for such things shrinking, particularly if guys like Pettis and fellow former WEC champion Miguel Torres are forced to change their fan-friendly style just to fit in with the crowd.